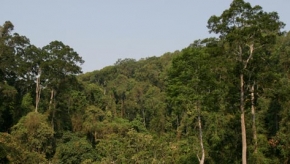 The Xishuangbanna biodiversity conservation corridors pilot site is located in southern Yunnan and stretches down to the border with Lao PDR. Of the eight corridors identified, CEP has focused activities in two (Nabanhe to Mangao and Mengla to Shangyong), the latter of which includes a transboundary nature reserve that is home to a wild elephant population.

The two corridors were established through CEP in 2007 in collaboration with the Yunnan Provincial Environmental Protection Department (YEPD). They encompass nearly 18,000 hectares and forest degradation is considered the greatest threat to biodiversity in the area. In total the two corridors cover 48 villages with a total population of 11,233 that includes five major ethnic groups (Dai, Hani, Lahu, Jingpo, and Han).

Besides cultivating paddy fields, farmers in the Nabanhe-Mangao corridor are mostly involved in tea and sugarcane production. In the Mengla-Shangyong corridor there has been a surge in rubber plantations with farmers becoming increasingly dependent on this commodity. This has led to increased competition over natural forest resources and less diversified production of cash crops such as fruit and oil.

Building on the Phase I work described above, CEP is continuing to supporting YEPD to improve biodiversity conservation and livelihoods in the corridor areas. This includes helping facilitate YEPD cooperation efforts with Lao PDR counterparts on 200,000 hectares of joint protected areas, strengthening biodiversity conservation corridor management, and promoting sustainable livelihoods.