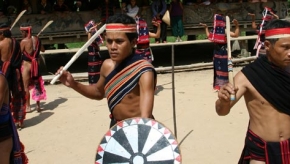 Biodiversity conservation corridors at this pilot site cover 130,827 hectares in Quang Nam and Quang Tri provinces. The corridors include part the Central Annamite mountains – ranked as a ‘critically important’ landscape due to the unique variety of species that inhabit this area.

The area is facing high levels of habitat loss and degradation, mainly through shifting agriculture, hunting, trapping, and illegal logging. These threats have been exacerbated as road development increases access, particularly along the Ho Chi Minh Highway.

Activities in the pilot phase covered 21 communes for whom the main source of income for the communes is agriculture, with forest products constituting a secondary source. A study revealed that 90% of households in the pilot site have incomes below the national poverty line.

Livelihood interventions included the development of forest and livelihood plantations, including a livelihood model based on the Acacia species. Commune Development Funds (CDF) have also provided grants and loans for livelihood activities.

Despite their being no precedence for conservation corridors, the project was able to attain provisional agreement for the 130,827 hectares to be delineated on maps for biodiversity corridors under the BCI sustainable management regime. A series of workshops was also held, involving legal experts and government partners, to discuss allocation of forestry and land use rights with communities.

Ecosystem restoration efforts included the restoration of 274 hectares of forest in Quang Tri and 428 hectares in Quang Nam. In addition, biological assessments and species monitoring training were conducted. Training was also held on community-based forest management.

Overall, BCI beneficiaries reported that they had benefited from capacity building activities, while their skills in forest protection and income generation had improved. Only 8%of respondents stated that BCI had helped them secure land access and tenure, however 62% had received support for livelihood plantations and agroforestry.

The World Wildlife Fund led implementation of the project.

Recognizing the importance of the pilot site to the country, in early 2011 Viet Nam took out a $30 million loan from ADB to further the work begun by CEP. The site is now under the remit of the Biodiversity Conservation Corridors Project.