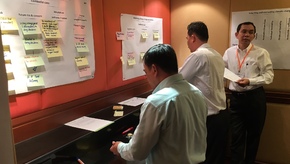 As part of CEP's Vulnerability and Adaptation to Climate Change activity, this series of three training workshops aim to build the capacity of government planners in the GMS to work with communities to integrate climate change adaptation into local level development planning.

The objectives of the first workshop, held in August 2016, were to establish a shared understanding of climate change in the context of communities in Southeast Asia and introduce them to a framework for assessing climate change vulnerability and adaptation options.

During the two months following the workshop, the 16 participants from Cambodia, Lao PDR, and Viet Nam conducted a situational analysis and risk profiling in select communities involved in the Biodiversity Conservation Corridors project.

During 26-28 October 2016, the participants reconvened for a second workshop to learn how to utilize the situational analysis and risk profiling information to conduct future visioning exercises to understand likely risks and changes in the target communities due to both climate change and evolving socioeconomic conditions.

Following further field work to conduct full assessments in their respective communities, the group met for the third and final workshop in February 2017 to share findings from their assessments and to brainstorm adaptation options, including how to integrate them into community development plans.