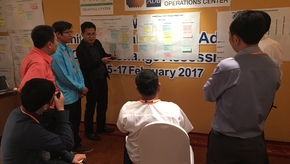 During the past 18 months, 15 government planners from Cambodia, Lao PDR, and Viet Nam have learned key concepts of adaptation planning, including conducting situational analyses, risk profiling, and future visioning.

In between the three workshops (the first two were in August and October 2016) they applied their learning at study sites in their respective countries.

At this workshop, they built on their analyses to identify adaptation measures or options that will enable their target communities to better manage future risks, especially those influenced by a changing climate.

They will also learn about mainstreaming adaptation into community plans and develop an implementation plan for their recommended interventions.